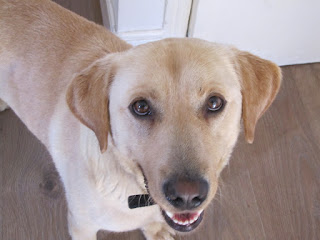 I am not the most prolific of bloggers, sometimes I have nothing to say, sometimes I have lots of inspiration but life gets in the way. This week, we have been dealing with an unexpected Guest, quite a lovable, eager to please guest but one that hasn't been taught very many manners and thus is quite demanding.

Rolo is a five year old, neutered male Labrador, that was taken to the vets in order to be euthanized or in our friendly 21st century euphemistic terminology, to be Put-To-Sleep. Luckily for Rolo, the vet recognizing his gentle trusting nature, refused to kill this beautiful healthy dog and called in our local animal rescue organization to take him into their care. Drogheda Animal Rescue, eventually put out an appeal, via social media for a foster home. So, there was I, feet up and cup of tea in hand, idly scrolling through sodding Facebook and there he was - again. This was the second shout-out for a foster home, original offers had fallen through and despite really not wanting the bother of another big dog, I just couldn't resist him.

Myself and Mr S have a 'thing' about Labs, we both grew up with them and appreciate the characteristics, good and bad of the breed. It was probably one of the reasons that our relationship has stood the test of time, love me...love my Lab. I doubt very much sharing my life with a Rottie or a Poodle for example, fine dogs for some folks, just not a fit for me. Sometimes I think that favoured dog-breed are a bit like personal politics, religion or football teams, once chosen then hard-wired into preference. Other times, I tell myself to cop-on and that a dog is a dog and that there are far too many shallow assumptions about the characteristics of each breed. Indeed, our relatively modern obsession with only the appearance of a dog has had many unfortunate consequences for the health and well-being of many dogs.

So, here is the UK Kennel Club's fairly measured opinion of the Labrador Retriever and a valid  opinion that many will seek out when it comes to researching a potential family pet.

The Labrador is one of the best all-round dogs in the world. Not only used for retrieving game, he has also made his mark in the world of assistance dogs and as a ‘sniffer’ dog for drug and arms detection...A real gentleman, the Labrador adores children and has a kind and loving nature and a confident air. The big city is not really his scene; a bit of a country squire at heart, he comes into his own in rural surroundings. - See more at: http://www.thekennelclub.org.uk/services/public/breed/display.aspx?id=2048#sthash.UfnxlLNJ.dpuf - See more at: http://www.thekennelclub.org.uk/services/public/breed/display.aspx?id=2048#sthash.UfnxlLNJ.dpuf

But, I think that this description of the breed (and any breed) must contain the caveat of, 'only with early socialization, adequate exercise and consistent reward-based training'. So far Rolo has managed to escape from our supposedly dog-secure garden, jumped into the bath, chewed our skirting boards, chewed shoes, scraped all the paint from our kitchen door, cried when left alone, jumped up on all fours on the kitchen table, stolen food from plates, jumped up onto the wheelie bins and when he spots another dog on his walk wants to immediately play.

Ah sweet, you may think but today when off-leash out in the field he spotted a big husky about 500 yards away across a ploughed field and barrelled off, there was no amount of desperate calling, whistling and treat waving would bring him back. Thankfully, it was a friend of mine with the husky and he was easily brought back. Additionally, after his dinner he gets into particularly amorous mood and ignoring our own neutered bitch has taken a special liking to me. I never thought I would experience dog foreplay...shudder. It is like living with a hyper 40k horny puppy. Rolo is a lucky dog though, he has a gorgeous gentle nature, his eyes light up when he sees you and he is brilliant with the children so despite wanting to strangle him myself after 48 hours; he is staying until we can sort out a more permanent home for him.

He is so willing to please and listen, it makes me want to cry. For Rolo's only real crime was that his owner died and he was locked up in a shed for a year. I think he was an outside dog through for the majority of his life as the only commands he knows are OUT and NO! Slowly we are making progress, he is becoming calmer, learning to Sit and Stay. He has stopped crying at night and scraping the door, He is at least pausing before vaulting over the stair gate, in pursuit of food, company or shoes. I know he is happy to be here but if he catches a glimpse of a certain type of car when out on his walk, he watches it with thoughtful attention. My own dog Rosie is Most Annoyed about this new development but is indulging herself wrestling and sparring with the big guy.

So, I would say that for me the rewards of dog ownership/fostering are worth so much more than the effort required, the commitment required, the time that the hounds eat up but I would also say that if you think it is going to be easy, walk away. If you are thinking of buying a dog for your child, do not even think about it. If you are thinking of buying a puppy because it is cute or sick, walk away. Research your breed, yes. Pick the type of dog that suits your lifestyle, yes. But realise that your lifestyle is going to change, should change and that on average a dog will live for fifteen years.

It takes time and incredible patience to train and educate your dog, most people don't mind a puppy jumping up but if it is 40k of mud and slobber that is destroying your mate's new coat, it can get tricky. Exercise is critical, for the health of the dog, physically and mentally. No matter what size, I know a man who jogs with a Chihuahua.  My Dad recently adopted a 9month old Cavalier King Charles, her owners had lost interest in her, they wanted to go to the gym and not exercise the dog. I don't understand this. I would much rather be out in the fields with my Mutt, than stuck inside a gym with artificial lights and annoying music. Walking is good for me too, both physically and mentally. I can have that extra glass of Red tonight and the regularity of the exercise keeps the 'Black Dog' away.

However, if you have bought a dog and for whatever reasons you regret it, the animal welfare charities, just like our own Drogheda Animal Rescue are absolutely fantastic, they will organise a new home for your dog with no judgement. Recently, DAR rehomed a group of dogs in Sweden, isn't that just fantastic?
If you have stayed all the way to the end of this blog post, thank-you so much! I will leave you with some pics of the canines. 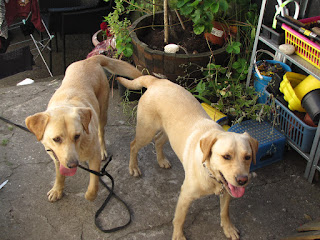 EDIT: Update - Rolo was adopted by a lovely family who have a dairy farm by the sea. 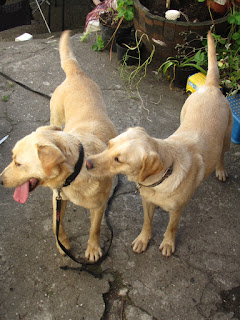 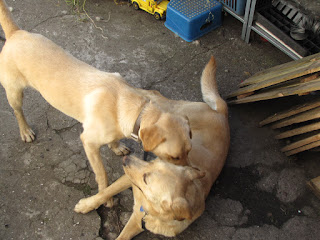 Linnet In Oriel
Hello. Thank-you for visiting my blog. It is a little snapshot of my life as I approach a new stage of family life, as a stay-at-home parent to two school children! I am studying with the Open University as well as attempting to learn the violin and explore the world of crafting and thrifting for treasure! x